Home » The Role of Nutrition

The Role of Nutrition 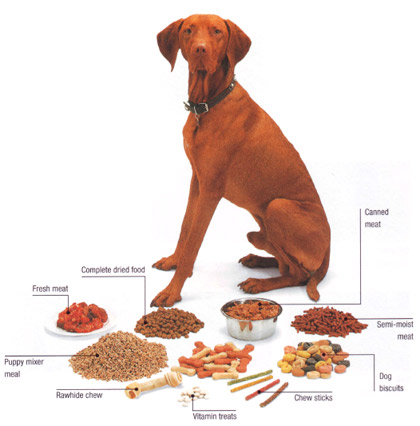 Epi4Dogs is very pleased to have permission from WikiVet to share their new Veterinary OnLine Teaching Module  section on “Nutrients” as they specifically relate to the dog and cat.

When managing EPI pets, we understand the necessity of implementing the proper pancreatic replacement enzymes and administering B12 and antibiotics (if needed).

However… it is becoming more and more evident that the final piece of optimally managing EPI is often finding the right DIET too!

Although normally when Epi4Dogs has permission we like to reprint the entire sections on our website… however…. this Nutrient Teaching Module is quite extensive and would be best viewed/read on WikiVet’s website…..  please go to their link:  https://en.wikivet.net/Nutrients

**** Of special interest to the EPI care-taker would be the modules on Proteins, Fats and Carbohydrates. ****

The following is a list of contents of these 3 topics (Protein, Fats & Carbs) in the teaching module   :

PROTEIN – Protein is a macronutrient comprised of amino acids chains folded into primary, secondary, tertiary, and quaternary structures to form the physical components of plants and animals. Protein is required to provide both nitrogen and essential amino acids. There are no protein stores in the body and dietary protein intake replenishes nitrogen and amino acids that are lost during normal cellular turnover in the body.

FATS – Dietary fats are predominantly found as the glycerol molecule triglyceride, which are esters of organic acids and glycerol. Fat storage within the body is referred to as adipose tissue and the terms “fatty acid” and “lipid” are used interchangeably with the term fat. Dietary fat is a rich and important source of energy for companion animals, providing more than twice as much energy per gram than protein and carbohydrate.
CARBOHYDRATES (and Fibre) – Carbohydrates (saccharides) are a group of carbon-based molecules, that are naturally found asmonosaccharides, disaccharides, or polysaccharides. Carbohydrates are a common source ofenergy, however they are not considered an essential nutrient in dogs or cats. Functionally carbohydrates are classified as absorbable, digestible, fermentable or non-fermentable.

This  teaching module is a collaboration of new veterinary educational materials focused on the dog and cat.The content in these teaching modules have been developed and written by Dan Chan, Dr Richard Butterwick, Dr Ivan Burger, Dr Penelope Morris and Dr Lisa Weeth

And endorsed by WALTHAM®, a leading authority in companion animal nutrition and wellbeing for over 50 years and the science institute for Mars Petcare

The Role of Nutrition

The Most Common Digestive Diseases: The Role of Nutrition

Gastrointestinal problems are a major concern for small-animal practitioners. Specifically chronic disorders of the digestive tract can be difficult to manage because of the limitations of the diagnostic procedures and the multiplicity of possible causes. The current chapter summarizes the basic facts on gastrointestinal physiology of dogs including the intestinal microflora and the immune system. The most frequent digestive disorders are presented in a problem orientated manner including diagnostic aspects and medical and dietary treatment. The role of dietetics is considered specifically for each of the different types of disease considered.

The small intestine (SI) is the principal site for digestion and absorption of nutrients, and is key to electrolyte and fluid absorption. The villi and microvilli contribute to the huge surface area, which facilitates absorption and assimilation of nutrients. Enterocytes are highly specialized cells involved in absorption processes. A brush border (or microvillus membrane; MVM) is present on the luminal surface of the enterocytes, and contains enzymes necessary for digestion of nutrients. Carrier proteins assist in the transport of amino acids, monosaccharides and electrolytes. The turnover of both enterocytes and microvillar proteins is influenced by luminal factors such as pancreatic enzymes, bile salts and bacteria.

Digestion and Absorption of Food

Dietary fats are emulsified by their interaction with bile acids in the small intestine, and subsequently digested by the pancreatic enzymes lipase, phospholipase and cholesterol esterase. Triglycerides are digested to monoglycerides and free fatty acids. In combination with bile acids, micelles are formed enabling absorption as monoglycerides and free fatty acids .Bile acids are reabsorbed by a specific carrier mechanism in the ileum, and then recycled by the liver. After absorption, long-chain fatty acids are re-esterified to triglycerides, incorporated into chylomicrons and then enter the lymphatics. Medium and short chain fatty acids were originally thought to be absorbed directly into the portal circulation, but recent work has questioned this theory (Sigalet et al., 1997). 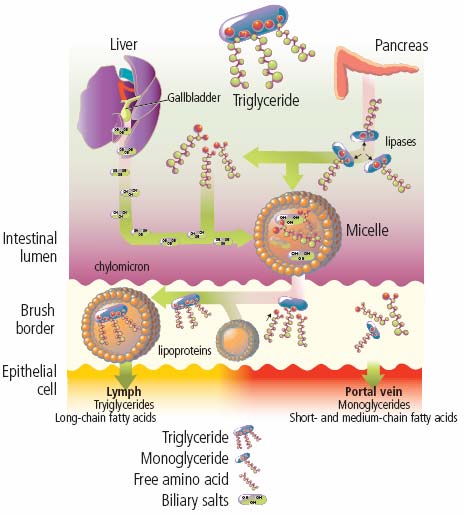 Starch is the major digestible polysaccharide in common food and is degraded by pancreatic amylase to maltose. Maltose and other dietary disaccharides (lactose and sucrose) are digested by MVM enzymes to constituent monosaccharides, which are then absorbed by specific transporters or by facilitated transport. Monosaccharides are then transported across the basolateral membrane into the portal circulation. 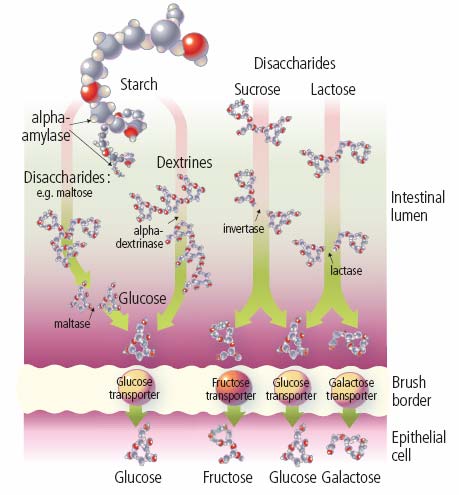 Macrominerals and trace elements are mainly absorbed from the small intestine, but the large intestine may also take part in the absorption processes. Active calcium absorption is subjected to regulatory mechanisms that are mediated by vitamin D, parathyroid hormone and calcitonin. These homeostatic mechanisms allow the organism to adapt to the different dietary intakes within certain limits. However, in dogs a fraction of dietary calcium is absorbed by passive processes. Phosphorus is less well studied and seems to be regulated by similar mechanisms. Magnesium is absorbed without homeostatic regulation so that the blood magnesium levels have a higher variation. Sodium, potassium and chloride are mainly absorbed in the small intestine and the absorption rates normally exceed 90 per cent. The trace elements are mainly absorbed from the small intestine, but the colon may also contribute to the absorption of trace elements. The absorption rates of zinc, iron and manganese are subjected to regulatory mechanisms. Active transport systems have been demonstrated for manganese and copper. Other elements are absorbed by passive diffusion.

Lipid-soluble vitamins (A, D, E and K) are dissolved in mixed micelles, and passively absorbed across the MVM.

Water-soluble vitamins, most notably B vitamins, are absorbed by passive diffusion, facilitated transport or active transport. The absorptive mechanisms for folic acid and vitamin B12 are more complicated, summarized here: 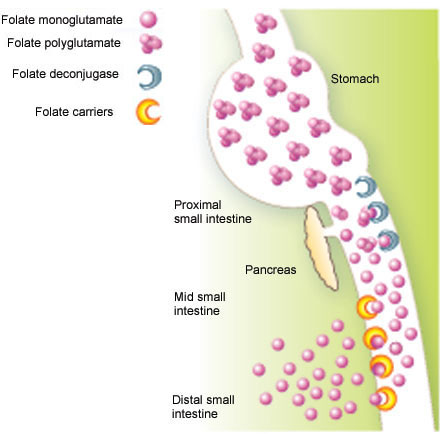 Assimilation of folate. Dietary folate is present in the diet as a conjugated form (with glutamate residues). This conjugate is digested by folate deconjugase, an enzyme on the microvillar membrane, which removes all but one residue, before uptake via specific carriers situated in the mid-small intestine.

Assimilation of cobalamin. Following ingestion, cobalamin is released from dietary protein in the stomach. It then binds to non-specific binding proteins (e.g. “R-proteins”). In the small intestine cobalamin transfers onto intrinsic factor (IF), which is synthesized by the pancreas. Cobalamin-IF complexes pass along the intestine until the distal small intestine, where cobalamin is transported across the mucosa and into the portal circulation.

The resident bacterial flora is an integral part of the healthy intestinal tract and influences development of microanatomy, aids in digestive processes, stimulates the development of the enteric immune system, and can protect against pathogen invasion. Healthy individuals are immunologically tolerant of this stable flora, and loss of tolerance may contribute to the pathogenesis of chronic enteropathies e.g., inflammatory bowel disease (IBD).

The populations of bacterial flora quantitatively increase from the duodenum to colon, and are regulated endogenously and by a number of factors, including intestinal motility, substrate availability, various bacteriostatic and bacteriocidic secretions (e.g., gastric acid, bile and pancreatic secretions). A functional ileocolic valve is the anatomical barrier between the colonic and small intestinal microflora. Abnormalities or dysfunction in any of these factors may lead to bacterial flora abnormalities, which may be quantitative or qualitative.

There is currently no consensus as to what constitutes a “normal” SI population in healthy dogs; some studies suggest that healthy dogs can harbor up to 109 CFU/mL aerobic and anaerobic bacteria in the proximal SI. Therefore, the “cut-off” for normal flora in dogs cannot be extrapolated from humans, and descriptions of small intestinal bacterial overgrowth (SIBO) in dogs using a cut-off value of 105 may be spurious. The intestinal microflora is subjected to endogenous and exogenous regulatory influences. Diet composition will impact the concentrations of bacteria in the gut. High protein diets favor the growth of proteolytic bacteria, especially clostridia, while certain fermentable fibers stimulate the saccharolytic bacteria, for instance bifidobacteria and lactobacilli.

Role of the Mucosal Immune System

The SI mucosa has a general barrier function, but must also generate a protective immune response against pathogens, whilst remaining “tolerant” of harmless environmental antigens such as commensal bacteria and food. Yet despite recent advances in our understanding of the structure of and interactions in the immune system, it is still unclear as to how it decides to respond to or become tolerant of a particular antigen.

Such a distinction, however, is not absolute, and there is overlap between the functions of these different sites. The population of immune cells is diverse and includes T and B lymphocytes, plasma cells, dendritic cells, macrophages, eosinophils and mast cells. Protective immune responses are critical for guarding against pathogen invasion, and both cell-mediated (synthesis of cytotoxic cells) and humoral (immunoglobulin production) responses can be produced. However, of equal if not greater importance is maintenance of mucosal tolerance. This is not surprising, given that the majority of luminal antigens are derived from innocent dietary components or endogenous microflora. Generation of active immune responses to such ubiquitous molecules is both wasteful and potentially harmful, since it could lead to uncontrolled inflammation. Indeed, a break down in immunological tolerance to commensal bacteria is thought to be a critical step in the pathogenesis of inflammatory bowel disease.

Whilst the mechanisms by which mucosal tolerance actually occurs have been well characterized, the fundamental question of how the GALT decides when to and when not to become tolerant remains unresolved. Nevertheless, the critical cell in generating tolerance is the CD4+ T-cell, either by down-regulatory cytokine synthesis (e.g., TGF-β, or IL-10) or via cell-cell interactions (e.g., through CD25+, the IL-2 receptor). Interestingly, the cytokines that mediate tolerance (namely TGF-β, and IL-10) also facilitate IgA production, the most important mucosal immunoglobulin. Therefore, generation of mucosal tolerance could potentially occur in parallel to specific IgA responses. Interestingly, IgA “coats” the mucosal surface and protects by immune exclusion (i.e. preventing antigens from crossing the mucosal barrier). Given that immune exclusion limits the amount of antigen to which the mucosal immune system is exposed, its effect is also “tolerance-generating” because it minimizes immune responsiveness.