In 2015 they came out with a new treatment for Fistulas that appears to really work, and often better than Cyclosporine. The new product is called : 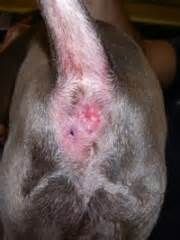 IF YOUR PUP IS STRUGGLING WITH FISTULAS…..PLEASE TALK TO YOUR VET ABOUT THE POSSIBILITY OF TRYING TACROLIMUS OINTMENT

At The University of Tennessee, we have had good success treating perianal fistulas with topical tacrolimus (Protopic 0.1%—Fujisawa Healthcare) applied twice a day until the lesions resolve, then tapered to the lowest frequency that controls the inflammation (usually every two or three days).1Tacrolimus is a macrolide immunosuppressant that inhibits T-lymphocyte activation. It penetrates the skin better than topical cyclosporine does.2

Tacrolimus costs about $70 for a 30-g tube, so sticker shock can be a problem. Since only enough ointment is needed to cover the lesions, the 30-g tube usually lasts one to three months. Owners should use a cotton-tipped applicator or gloves to avoid contacting the ointment. In people with atopic dermatitis, a mild burning sensation has been reported; however, the patients I have treated for perianal fistulas have not demonstrated any adverse reactions.

For severe cases, we initially give either high-dose prednisolone or cyclosporine, in combination with topical tacrolimus to control the lesions (Figures 1 & 2). Either prednisolone or cyclosporine works well. Prednisolone (0.75 to 1 mg/lb/day orally for two or three weeks; taper the dose over two or three months) is cheaper than cyclosporine but has more side effects. Owners who give cyclosporine (5 mg/kg/day orally on an empty stomach; taper the dose to every other day after six to eight weeks of therapy or when 80% resolution occurs) are usually pleased despite the higher cost.