The following photos were submitted by and with Dr. David A. Williams’s permission. 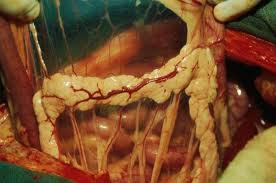 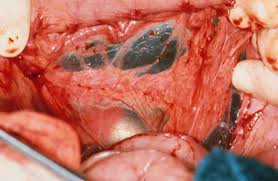 A canine pancreas with EPI (exocrine pancreatic insufficiency)… the end stage of PAA:

An excellent diagram and role of the Pancreas

An excellent description of the functionality and visuals of the Pancreas and the role of the Pancreas by John Hopkins Medical University….. EPI is when the “acinar cells” in the pancreas atrophy…. please check out this link for the full (and very easy to understand) explanation:

The pancreas can also be thought of as having different functional components, the endocrine and exocrine parts. Tumors can arise in either part. However, the vast majority arise in the exocrine (also called non-endocrine) part. Since the parts have different normal functions, when tumors interfere with these functions, different kinds of symptoms will occur.

Understanding the Pancreas
THE PANCREAS

Is a small light “pinkish tan” glandular organ positioned under the stomach and along side the duodenum (upper small intestine). The “endocrine” pancreas is the part of the pancreas that secretes hormones such as insulin and glucagon which regulate blood sugar. The “exocrine” pancreas produces enzymes used to digest food. These two different types of pancreatic tissues are all mixed together throughout the entire pancreas.

The pancreatic digestive enzymes include (1) proteases and trypsin to digest protein, (2) lipases to digest fats, and (3) amylase to digest starches.  They are stored in inactive forms inside special granules in the exocrine pancreatic tissue (the “acinar cells” ) and are secreted into the duodenum (the first part of the small intestine after the stomach) when ground up food begins its passage out of the stomach.  Once nutrients are broken down into smaller molecules (i.e. they are digested), they can be absorbed down the entire length of the GI tract.  Without adequate production of these enzymes, food cannot be digested,  nutrients cannot be absorbed and consequently the body and it’s organs start to starve and everything becomes compromised. Without proper enzyme and dietery treatment, death happens, either by starvation or organ failure.

Three major groups of enzymes are critical to efficient digestion are as follows:

Digestion of proteins is initiated by pepsin in the stomach, but the bulk of protein digestion is due to the pancreatic proteases. Several proteases are              synthesized in the pancreas and secreted into the lumen of the small intestine. The two major pancreatic proteases are trypsin and chymotrypsin, which are synthesized and packaged into special secretory granule vesicles as the inactive proenzymes trypsinogen and chymotrypsinogen.

Proteases are rather dangerous enzymes to have in cells, and packaging of an inactive precursor is a way for the cells to safely handle these enzymes. The secretory vesicles also contain a trypsin inhibitor which serves as an additional safeguard should some of the trypsinogen be activated to trypsin; following exocytosis this inhibitor is diluted out and becomes ineffective – the pin is out of the grenade.

Once trypsinogen and chymotrypsinogen are released into the lumen of the small intestine, they must be converted into their active forms in order to digest proteins. Trypsinogen is activated by the enzyme enterokinase, which is embedded in the intestinal mucosa.

Once trypsin is formed it activates chymotrypsinogen, as well as additional molecules of trypsinogen. The net result is a rather explosive appearance of active protease once the pancreatic secretions reach the small intestine.

A major component of dietary fat is triglyceride, or neutral lipid. A triglyceride molecule cannot be directly absorbed across the intestinal mucosa.  it It must first be digested into a 2-monoglyceride and two free fatty acids. The enzyme that performs this hydrolysis is pancreatic lipase, which is delivered into the lumen of the gut as a constituent of pancreatic juice.

Sufficient quantities of bile salts must also be present in the lumen of the intestine in order for lipase to efficiently digest dietary triglyceride and for the resulting fatty acids and monoglyceride to be absorbed. This means that normal digestion and absorption of dietary fat is critically dependent on secretions from both the pancreas and liver.

The major dietary carbohydrate for many species is starch, a storage form of glucose in plants. Amylase (technically alpha-amylase) is the enzyme that hydrolyses starch to maltose (a glucose-glucose disaccharide), as well as the trisaccharide maltotriose and small branchpoints fragments called limit dextrins. The major source of amylase in all species is pancreatic secretions, although amylase is also present in saliva of some animals, including humans.

In addition to the proteases, lipase and amylase, the pancreas produces a host of other digestive enzymes, including ribonuclease, deoxyribonuclease, gelatinase and elastase.

Accurate diagnosis of Exocrine Pancreatic Insufficiency was the development of the Serum Trypsin-like Immunoreactivity test, a blood test. Prior to this, an assortment of inaccurate fecal tests were utilized. The TLI test looks for a normal level of trypsin-like enzymes in the bloodstream. In the normal animals, trypsin, an enzyme of protein digestion, is stored in the pancreas in an inactive form so as to avoid digestion of one’s own body. Still, trace amounts of active enzyme make it into the bloodstream. This is harmless, normal, and detectable. A dog or cat with EPI will have almost no Serum Trypsin-like Immunoreactivity in the bloodstream. The patient must be fasted for the test to be accurate but only a single blood sample is needed to make the diagnosis.

Dietary supplementation with digestive enzymes is an effective therapy for EPI even though most of the supplement given is digested in the stomach along with other dietary proteins. The little bit that survives the acid bath of the stomach and its own protein-digesting chemicals turns out to be enough to stop the diarrhea and enable the patient to actually gain some weight. Powdered enzymes (Viokase-V, Pancreazyme) seem to work the best though tablets are also available and some like to give raw chopped beef, porcine or lamb pancreas.

In the past, it was suggested that incubating the enzymes in the patient’s food would help initiate the digestion process in the food bowl, then this was stated as not true, then true and now not true. Unfortunately there has been a mis-understanding about the function of enzymes (even on this website!) with getting desired results but assumptions were made for the wrong reasons. Enzymes cannot incubate the food at room temperature, or if so very, very little actually incubates. The environment of the intestines and stomach are required for the enzymes to actually be activated. SO…. why has recently hands-on-experience with over 1,000+ positively confirmed EPI dogs of all breeds seem to have proven otherwise? Assumption. Since incubation of enzymes on food for a minimum of 20 minutes, longer (up to 1-2 hours) seems to work…..but what may be happening is that when softened food (vs. whole food) reaches the intestines and stomach it is then more easily broken down with the replacement enzymes. Hence, the mis-understanding. Mixing the enzymes well into the food prior to feeding the food appears to eliminate mouth sores and/or mouth bleeding that afflicts some dogs when given enzymes. Some vets recommend less enzymes and this also alleviates mouth sores and/or bleeding.

A highly digestibility diet is the best choice for an EPI patient. Although each EPI dog varies slightly from one another in their dietary requirement, the basic starting point with food, (if dry food) is to feed a grain-free kibble with no more than 4% fiber. There is new evidence that once on enzymes, most EPI dogs should be able to tolerate a normal amount of fat. As a matter of fact, restricted fat may be detrimental to the dog. HOWEVER, if there still is a digestive upset when fat is slowly added to the diet, there may be another gastrointestinal issue in addition to EPI where it then would be beneficial to limit the fat intake.  If feeding raw meats, trim excess fat. Avoid grains, limit fruits and vegetables. Remember, managing EPI comes with a basic set of rules that are adjusted to suit each individual dog.

EPI patients commonly have an overgrowth of bacteria called SIBO, Small Intestinal Bacterial Overgrowth in their intestines which means that the unabsorbed nutrients in the tract have fed the bacteria living there (instead of the patient) and an overpopulation of bad bacteria has occurred. This results in a vitamin B-12 deficiency as the bacteria consume the vitamin (instead of the patient getting some). A course of 30 days of antibiotics (metronidazole or tylan) is advised to correct this problem especially early in the course of EPI treatment. Once antibiotics are given for 30 days, it is further advised to administer probiotics to allow “good” bacteria (good gut flora) to develop and not leave room for bad bacteria (SIBO) to take over again. A regimen of vitamin B12 injections are also recommended for patients with EPI if their B12 levels are affected, and many times they are so this should be checked.

Treatment is for life with enzyme supplementation. In the majority of dogs, a positive response to therapy is usually noticed within a week or two of beginning enzyme and dietary treatment. This does not mean they have achieved stabilization yet. Stabilization may take anywhere from weeks to months to a few years. Some dogs never re-gain all their weight back, others do. Responses can be excellent but approximately one dog in 5 will simply not respond well or at all. Many do not ever regain a normal amount of weight., others not only gain their original weight back but exceed it and have to be placed on diets.

In parts of the world where enzymes are not readily available as powder, enteric-coated capsules, e.g. Creon, may be used. These are fed just before or during the meal. Sometimes people have to rely on tablets, these are most often not very effective but if used they need to be crushed. Unless you are told to by your vet, the  tablets or capsules should not be chewed.   Vegetable-based enzymes, e.g. Enzyplex, are almost NEVER sufficient to treat EPI.