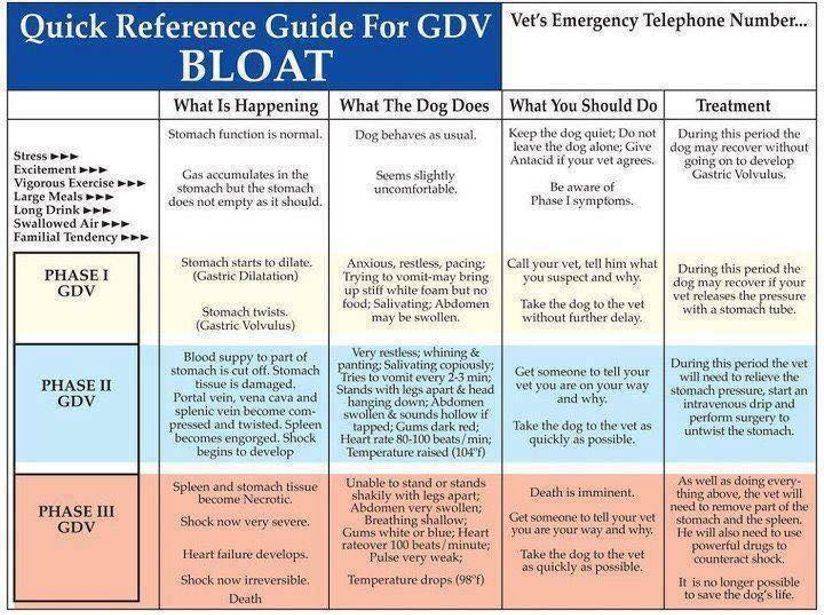 One of our Epi4Dogs member, Barbara, with Kolby… and their personal experience with Bloat (2017)

GDV: Bloat – This chart is very accurate in describing the stages of bloat.

My husband, Joe, and I had the harrowing experience of dealing with Kolby’s bloat 2 and 1/2 weeks ago. The biggest lesson we learned was how fast it develops and how quickly it progresses. I apologize for the length of this post, but I relate our experience so that perhaps it might be of help to someone else.

I had read about bloat on and off when Kolby was younger (because he is in one of the high risk groups) and I knew many of the symptoms. I always worried a little about it, but I actually thought he was in the safe zone because he was older (8 ) and not bouncing around as much as he did when he was younger. That thinking is incorrect. Dogs bloat more easily as they get older.

I had spent the day helping my friend in the city move across town, and I returned home around 6:30 p.m. Joe said he and Kolby had relaxed most of the day so there wasn’t any stress or excitement that is mentioned on the chart as a possible cause. He was very happy to see me.

I enzymed his dinner and started making ours. He ate half of his meal…..which wasn’t unusual. He sometimes leaves a bit of food and comes back a short time later to finish. He asked to go out to pee, so I took him; when he came back in, he finished his dinner, then asked to go out and poo. None of this was out of the ordinary. However, after he had pooed, he came in for a bit and then asked to go out again. It was about 8:45 p.m. This time he looked like he wanted to throw up. He ate a little honeysuckle and then came back in the house. He does this every once in a while so I still wasn’t concerned yet. But as I plated our dinner, I looked in the living room and he was trying to throw up again. His shoulders were hunched and he wasn’t bringing anything up even though he was trying. The food he had just eaten should have come right up. I knew he was in trouble.

He began to pant and pace. I got on the phone. All thoughts of dinner disappeared.

It was past office hours at our regular vet’s, so we had to call the Emergency number, which belongs to a 24/7 Veterinary hospital 40-45 minutes away. I described Kolby’s symptoms and told them we were on our way. My husband was already putting the crate in the car and opening the doors. Kolby was so good. He always rides in the car crate, so he climbed right in and tried to lie down, but he could only stand with his head down, turn around and around, pant, and cry. We made the trip in 35 minutes, but it seemed like eternity.

They were ready for us at the hospital and immediately took him to the back while they gave us forms to sign. We gave our permission for X-rays and the doctor called us back within minutes to tell us that Kolby had gastric dilatation and his stomach had twisted (volvulus). If you follow the chart, that means that he had gone from being perfectly normal to the preliminary stage of gas forming in his stomach and being slightly uncomfortable to Phase I and into Phase II within an hour and a half. The chart can’t tell us how long each dog will be in each phase, but if your dog exhibits any of the symptoms listed on the chart, call your vet immediately.

There are still hard decisions to make once you get your dog to the vet. As some of you painfully know, the surgery is risky and if there is an underlying issue, such as heart disease or other compromising health problems, a dog may not survive the surgery or the surgery may not be advised. The surgeon who examined Kolby did not find any compromising conditions. She did not consider EPI to be compromising and she was amazed that he had had EPI for 7 and ½ years and looked as well as he did. But she made it very clear that the surgery had risks. She was going to decompress the gas in his stomach, untwist it, and staple it to the walls of the abdomen so it wouldn’t flip again (called gastropexy). My hands were shaking as I signed the forms.

Processing all of this information in a short period of time and trying to make a decision under stress like this is not easy. Some of you may have had to euthanize your dogs in situations like this. Please be gentle with yourself and your decision. We do the best we can under challenging circumstances. We were fortunate that both of us were home at the time of the onset and that we made it to the vet in time. There would have been a very different outcome if we had not been home or if the distance had been farther.

The financial aspect of such an emergency situation cannot be overlooked. Each person’s situation is unique. Some people do not have the resources to afford a surgery such as this, especially with the unknown costs that could occur if there are complications. Again, I urge you to be gentle with yourself. We try to be as responsible as we can, making provisions for emergencies, purchasing pet insurance, etc., but sometimes things occur that we cannot prepare for.

Thanks to the expertise of skilled and compassionate doctors and staff at the veterinary hospital, Kolby came through the surgery and is on his way to recovery. We know, however, that although the gastropexy prevents his stomach from twisting again, it can still become distended with gas. So we will always have to be aware of the symptoms of bloating.

We are grateful to all those who helped him and us get through this. Evidently, he is quite strong. He has survived EPI and now GDV. He must have more light to share. And of course, we will continue to treasure the time we have with him.

To emphasize some of the points on the chart: