Home » Before & After » Cocco from Mexico 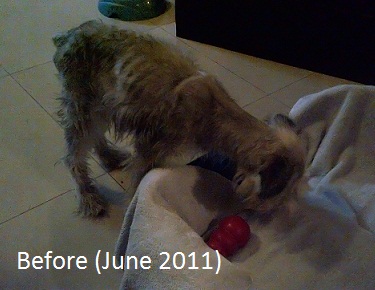 Cocco is our young miniature schnauzer, that was diagnosed with EPI when 4 months old, our vet gave us no hopes whatsoever telling us that there was no treatment, and that we should enjoy of our little buddy for as long as we could until his soon demise. Cocco was extremely thin, with his ribcage showing and everything, he passed from being a very active and mischievous pup, to just lying around all day…….All of this was very painful for us, and we struggled with every kind of low-fat food alternatives and good hopes only for about another 4 months, that was until we found this site and turned things around .

My wife and I started a 10 point rating system to track the pooping improvements, so while Cocco was on Creon his poops started getting better, harder, and more consistent!!, around 7 or 8.5 points according to our ratings and expectations. We were so excited when we first saw him struggling for his first time pooping something harder than a slushie out of him, haha, excited over poop, I was in kindergarten all over again, lol.

Cocco then started to gain some weight and enthusiasm!!, slowly but very notably, and in the meantime, I had already ordered the big guns!! and they were on their way to Laredo Texas where we could pick them up, 1 Kilo of pancreatin from EnzymeDiane, 1 bottle of Trinsic-B B12 capsules with intrinsic factor, some grain-free dog food, and a whole bunch of EPI brochures that enzymediane packs for just 1c… so, after 2 weeks on Creon, we went to pick up our EPI shipment, we live in Northern Mexico, so it was the longest 2 hour drive we’ve made. 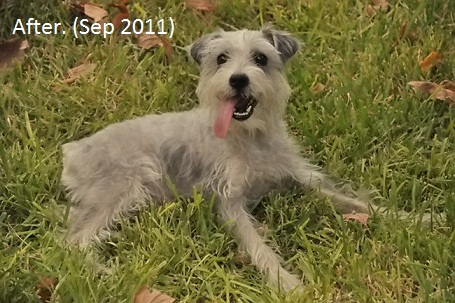 After that, and up until now, Cocco’s treatment is: half teaspoon of powdered pancreatin, mixed with 1 cup of grain-free Natural Balance LID: Sweet Potato & Bison grain-free kibble, with various broth, and/or a little chicken breast, or meat. Two times a day.

At first we were having second thoughts about the whole pancreatin ritual, since it seemed more complicated and bothersome that just shoving 1 pill down Cocco’s throat, which he was even starting to have a liking… but when we saw the first results of this pancreatin powder, it was the best poops We’d seen so far!!, it was 10 points for Gryffindor every time!!
After that, there was no going back