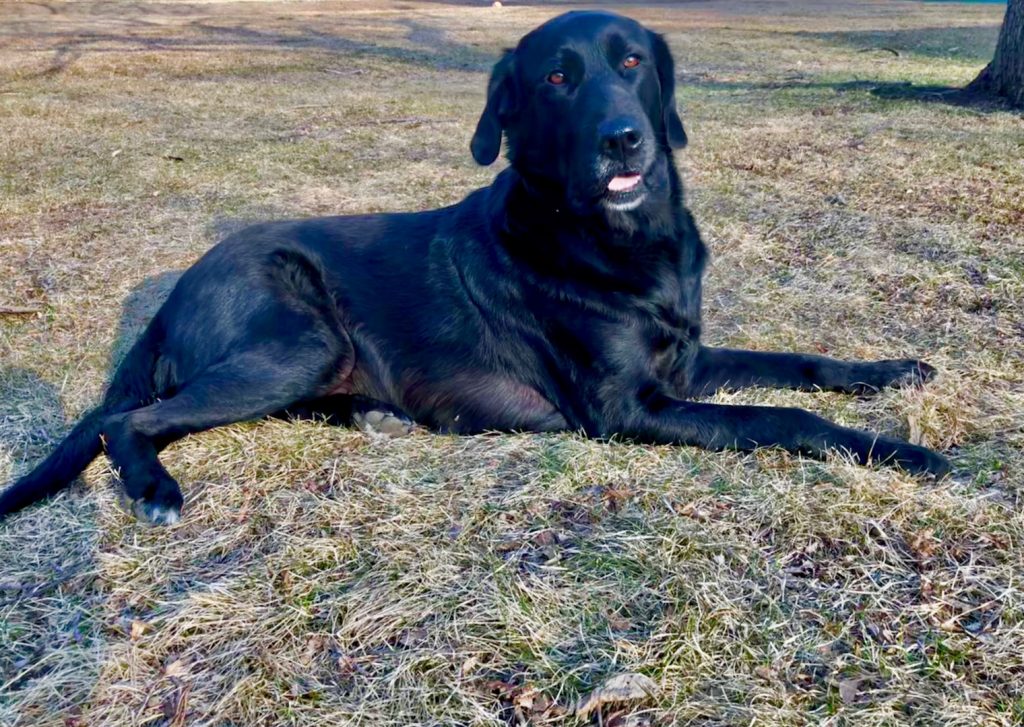 This is our Twiggy, April 2022, our Chunky Monkey!

Our Twiggy, an English Lab cross, was found as a stray living on the streets (June 25, 2021). When Edmonton’s Animal Care and Control Centre picked her up she was emaciated and weighed 48lbs. Her body condition score was 1 out of 9 and she was in danger of dying from starvation.

Vet care began immediately. After 5 days the vet noted that humane euthanasia may be the kindest option. There were no clear answers from her bloodwork, or improvement from medication and Twiggy’s explosive liquid diarrhea had not let up.

However, 7 days later, one last random test came back positive for Exocrine Pancreatic Insufficiency. Within 2 days receiving pancreatic enzymes Twiggy’s  diarrhea stopped and for the first time in a long while she started gaining weight.

We adopted Twiggy 3 months later. Our Great Dane had lost his best friend to heart failure and chose her over many other adoptable dogs. When Twiggy joined our family she still needed to gain more weight even after gaining 11 pounds while recovering in foster care.

With help from our vet it took us 7 months to get Twiggy to a healthy 80lbs.

We also found Twiggy benefitted greatly from an over the counter vitamin B12 oral spray for humans. The B12 is absorbed through mucus membranes.

A friend who had bariatric surgery suggested it.

In addition to Twiggy’s EPI journey….. she also shares an Instagram account with Duke, her new brother when she joined our family…  ….https://www.instagram.com/twiggyandduke/

Duke joined our family when he needed to be rehomed. Before we got Twiggy, Duke had spent 3 months every day lying for hours on his best friend’s grave. That ended the day he met Twiggy.  What a joy it is to watch these two dogs 🙂