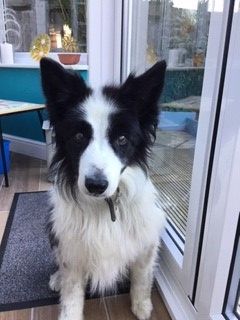 Ten years ago our little border collie puppy, Mel, was eating well, food obsessed and bouncy. But her weight was dropping and her stool was yellow and runny. It took 3 month of repeated tests and finally the vet suggested neutering her and doing an exploratory operation at the same time but he couldn’t see anything wrong. As she recovered, she ‘pooed’ on the floor at his feet and he finally understood what I had been saying to him.  I said it was like something was missing in her digestion. He broached the subject of EPI which I had not heard of.  Within days of starting enzymes, she was a different dog and the weight piled on. In the UK we use Panzyme which I can get on the internet.

At 2 years old she began to get poorly again. I came down in the morning and she had wet on the floor, it had dried and my feet stuck to it. I knew straight away it was diabetes. Again she was soon back to normal once we started her on insulin. Insulin commencement was not easy as she refused to be injected at first and getting the dose right took a while. Over the years her EPI has been fairly stable but the diabetes would be upset easily for instance when there were fireworks she got so excited she would become unstable for a week or so. As she got older she became more anxious and nervous. Then over the last 2 weeks she began to have frequent hypos. Last week she started falling over and by the time we got her to the vet she was fitting. Sadly on Monday night, December 21, 2020, just before Christmas, she crossed the rainbow bridge. The vet thinks she had a tumour somewhere but her body had had enough. Forever in our Hearts….. Jacqui