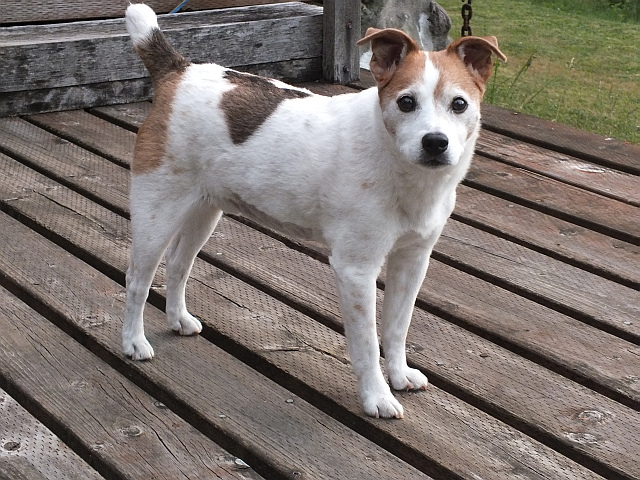 Mr. Mickey came in to our lives in August of 1999, a two month old, out- of –control bundle of energy.  After a couple of hours with the litter of 9 pups, I had narrowed down my choice between him and another pup, but at the last minute the other pup got in his water bowl and started digging.  Well I surely don’t want THAT behavior!

I couldn’t have chosen better. The next 13 plus years were non- stop for him, only slowing down for a surgery now and then, or when he HAD to go to sleep.  Even then I had to take the ball out of his mouth. He had so many antics that were his alone  When we went to bed if he was not ready he would take his ball up in the loft, pitch it over the edge, run down the stairs and get it.  Back up the stairs and repeat the process numerous times.  When he felt he was sleepy he would hop on the bed and crash.  Mickey loved the element of surprise.  He would place his ball outside the door of whatever room you had gone into and shut.  Then he would run and hide somewhere, and when you came out and kicked the ball he sprinted out from just the perfect hiding place, grab the ball and off he would go and played by himself.  He would bring the ball and drop it at my feet when I was on the couch, then go behind the couch and wait for me to surprise him by throwing it somewhere over the couch into the kitchen.  He had great fun!! Until I would have to leave him for a day or two, then he pined and made a problem for John to try to take care of! He was always in a good mood and ready to play with anyone, or by himself.  All of our friends referred to Mickey as our Home Entertainment Center.

The only time Mickey was not himself was when I had to leave him for a day or two with John.  Then he made sure John knew that no matter what he did, he was not doing it like MOM would.  Don’t forget his pills, he would stand in the hall until you followed him into the pill cupboard and stare at it.

He was truly one of a kind, and his loyalty to us, his pack, and his love for life will be missed always.   Play hard and rest in peace Mickey. You will be in our hearts and thoughts forever, Jill and John.