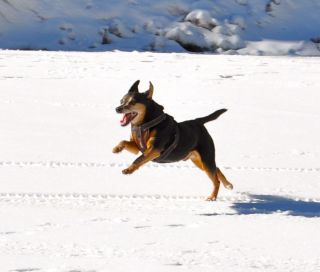 Lewis enjoying life to the fullest…… 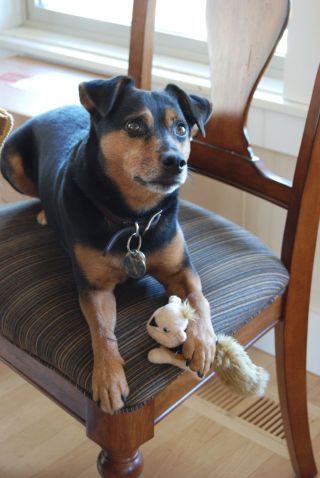 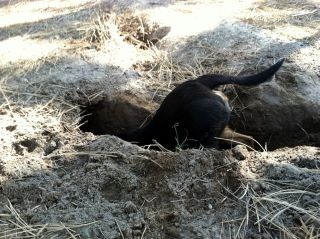 The Life of Lewis

From the beginning, Lewis would prance into the room as if to say, “I’m here, I’m lookin’ good”.  And he was looking good.  He had an air of supreme confidence, yet he was the sweetest, most sensitive and gentle dog.  He was the smartest dog I have ever known, which added to his charm and got him into trouble too.

He was also known as Lewie, Lew Lew, and Lew Lew Larue.

I met Lewis’ brother, Guy, at my grandson’s birthday party in 2002. Guy’s humans told me there was one puppy left in the litter, and it was Lewis. Their mom was a Jack Russell short smooth coat, and their dad was a standard Dachshund. All six puppies in the litter looked alike.

He came into my life at a very difficult time, and it was the best thing for me. He is an Idaho guy, and was named after Meriwether Lewis, of Lewis and Clark. The first thing Lewis taught me was that if you are ever going through a bad time, get a puppy. He will give you comfort and unconditional love that you can’t find anywhere else.

He has always loved little children.

Lewis was enthusiastic about everything he did. He played tether ball, he dug trenches, he rolled in dead geese, laid down to cool off in a puddle of horse pee, and was intensely loyal and loving.  At the dog park, he delighted in getting big dogs to chase him, then he would zig zag and reverse directions, leaving them scrambling to change directions.

He was a Houdini-level escape artist, scaling a six-foot chain link kennel with ease, and digging under the fence to go play with the dog next door.

When Buddy came into Lewis’ life, they were best friends from the start. Lewis, just a puppy, instinctively knew that Buddy was old and must be treated gently and with respect. When they played mouth-bite, Lewis would just nudge Buddy with the side of his head.

Lewis loved to stretch out and run in wide open places, like the beach and in the snow. It was wonderful to watch his pure joy at those times. He would zig zag and leap for the pure pleasure of doing so.

The cabin was Lewis’ favorite place, and I am glad that he got to spend the last three years of his life there. It was his territory, and he assumed responsibility to keep the area clear of moles, voles, birds, squirrels, chipmunks, raccoons, ducks and geese. Twice, he was almost killed by raccoons and had to be rescued. He remained confident in his abilities, even though he had only limited success. His best talent was digging, and he dug with a vengeance, leaving deep holes and trenches. It’s a good thing we live in the forest and don’t have a lawn.

Lewis always loved a good fire, whether it be inside or out. When he wanted a fire in the fireplace, he would stand on the hearth and look at us until we complied with his demand.

The creek was part of his domain. He was not a swimmer, but did wade regularly, and followed up by rolling in the dirt.

He was a dog with no boundaries. He assumed that he could go wherever he pleased, and be welcomed. He regularly jumped onto the dining room table searching for treats, could sometimes open cupboard doors, was adept at breaking into the garbage can, and everybody’s lap was fair game.

He was such a handsome dog, loved to cuddle and we believe that he was Prince of All Dogs in the World. Each evening, he jumped into my lap, leaned against me and tucked his head under my chin.

There will never be another dog like you, Lewis. Thank you for eleven years of joy, laughter, tears, cuddling, comfort, loyalty and companionship. I will love you forever, Helen.