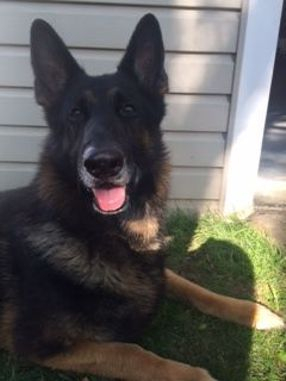 Kain was born on September 6, 2007. My recollection of his journey home is tattooed on my heart and in my mind. Asleep in my bed, he did not cry to go out, nor because he missed his mom. For now, I was his mom. Kain took well to my then 3 year old GSD, Angel. She would snarl and snap, but in the end she not only tolerated him, she was quite fond of him. 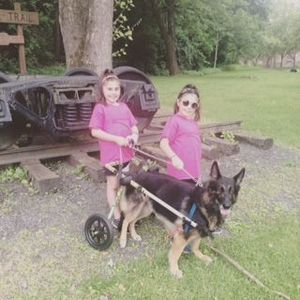 I often referred to Kain as one of my triplets as he was raised aside of my identical twin daughters, only months separating him and Eva and Mia in age. I thought my world was turned upside down when Kain was diagnosed with EPI. Kain was trained as a puppy, in basic training and Good Citizenship tested. He enjoyed agility and was a blood donor dog for Valley Central Animal Hospital. Kain and I worked together to create the PA/NJ EPI Dog Event which I was fortunate enough to have for 2 years at the Bethlehem Dog Park in Bethlehem PA. We obtained sponsorship from well know companies like Kong, Newman’s Own Organics, K9 Enzymes, Taste of the Wild, Honest Kitchen and many others. Hand feeding Kain became the norm and eventually Kain developed an eating disorder and was forced fed. I know that many others suffer with the same issue with their EPI dogs, so Kain and I decided to make an informational video to assist other families who suffer with the same. Not every dog will eat on their own. Sometimes teasers simply do not work. So when eggs or parmesan cheese fails you, you still have hope! If I could have force fed my boy for ten more years despite the time it consumed, I would still be doing it today. I always thought Kain’s journey in life would end when he decided to not accept the food at all. That simply was not the case. In March of 2016 we lost our 11 ½ year old German Shepherd Angel. Our hearts were aching and in May we brought home our new German Shepherd Karma. Karma filled the void Angel left for Kain. She gave him life again. 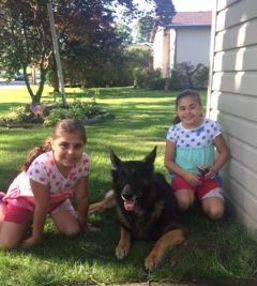 One day on a long walk last May, I noticed Kain’s paw pads were raw and bleeding.  His nails were worn.  I dismissed it as too long of a walk on too hot of a day.  Once his paws were back to normal he attempted another walk and yielded the same results.  I started noticing some dragging in the rear legs and a ten pound loss of weight.  He was losing muscle mass rapidly.  I knew it was Degenerative Myelopathy and I knew it was a matter of time until my boy would no longer walk.  In January Kain got his cart also known as a doggie wheelchair.  With the snowy Pennsylvania weather it would be some time until I could get him out in it.  The first day in his cart was AWESOME!  Kain was like a puppy again and was pulling me at a fast pace.  As weeks went by I noticed he would slip on the hard wood floor but had traction on the carpet.  Stairs were off limits so we slept together on the first floor.  When I left for work Kain and Karma stayed in my office and typically Kain was found on the couch when I walked in.  He started to have trouble getting up on the couch and his rear legs looked pigeon toed and crossed over one another as he walked.  He loved to play with Karma, he was still alpha to her.  It pains me to type this as I think back to remember Kain’s final weeks.  As days turned into weeks, Kain slowly could not walk.  I put him in “hospice care” in my home.  No stranger to tweaking things or making things easier for those who are suffering, I applied the same logic to caring for Kain as I did for my own parents before they passed.  I fenced off a greater part of my fenced in yard not allowing Karma or Kain to have access to a large part of the yard.  They exited to the yard via the garage floor which was painted and was easy for Kain to “slide” on.  With assistance he managed to get in and out of his back yard with ease.

I knew that Kain would tell me when it was time, and he did.  When my boy was barely able to take a step and was forced to drag his body to move, he and I both knew it was time. I attempted to make his last summer was his best summer filled with assisted walks, pool parties and on his last day he ate his “normal” meal followed by an untreated steak, bone and all. A piece of my heart will always be empty.  I’ve learned that every dog holds a special place in your heart. Kain will never be forgotten. 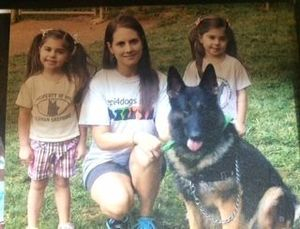