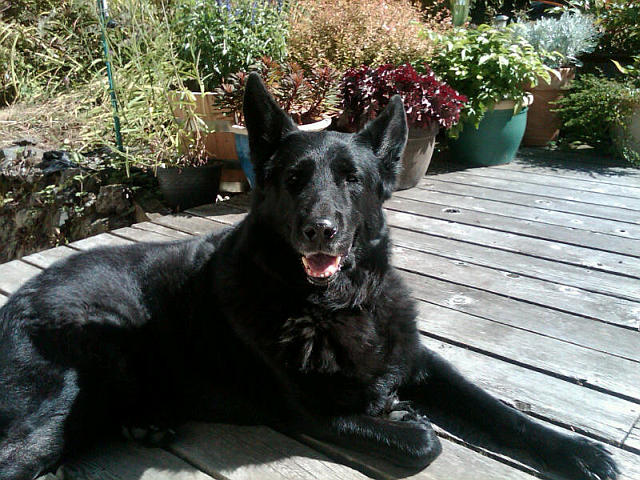 “Every Once In A While, A Dog Enters Your Life And Changes Your Journey”

On Monday, September 29, 2014, I made the hard decision to put Jed down. To say it was hard is really an understatement. It was a decision that I knew was coming, but I had been trying so hard not to make. Jed finally made it for me. He knew me so well, and I’m sure he knew that I would never be ready to make that final decision, that final act of love as I have heard it called, that we all find ourselves forced into making. So, that morning when he was no longer able to get up and move, with a heavy heart and a heavy sigh I said goodbye to my friend and soul dog.

I am going to miss that spirit of his, that overwhelming desire to live in spite of the obstacles he/we lived with. He was really remarkable that way—dealt with EPI (Exocrine Pancreatic Insufficiency Disease), Perianal Fistulas, Pemphigus, and never doubted or made me doubt, that he would survive (though Pemphigus caused me some genuine concern). Jed handled it all with a calm, determined “this is just another bump in the road” disposition that I marveled at. Even as he became more and more crippled he would get himself outside, attempt to play with Summer and, when he was having a good day, he would attempt to take in a few small adventures. As you know, Jed loved his adventures.

Jed left me and this world in the exact way he lived: with peacefulness and grace. He truly was a special boy. I can’t imagine that I

could ever be so lucky as to own another dog like him. He was gentle and sweet by nature; he didn’t have to be taught to be nice. In public he was a great ambassador for the breed. I was very spoiled by his personality.

I was thinking about just how remarkable Jed was in his battle against these auto-immune diseases. By God’s grace, we managed and were ultimately able to stabilize and/or beat them all into remission. And throughout, he remained a happy, cheerful, and amazingly healthy looking dog.

Our daily routine included many pills and supplements given twice daily and he took each one without problem or hesitation. He waited patiently for the timer on the stove to count down the 60 minutes it took for each meal to incubate in enzymes before he could eat. I have always regretted that I did not take a picture of him watching the clock because he would sit in the kitchen and stare that timer down until the very last second ticked off. Then he would remind me that it was meal time.

To watch him become crippled at age 9 was truly painful because his mind, his person, and his zest for life remained until our last day when I knew that he was utterly exhausted and ready to say goodbye.

The title of this Jedism was borrowed from a friend of mine because it perfectly describes the story of Jed and Leslee—every once in a while, a dog enters your life and changes your journey.

Jed and I first met when he was three months old and was competing against his litter sister, Lexi, and brother, JD, in his first puppy sanction match at Carco Park. I fell in love with that darling and vivacious solid black

As time passed, a couple of people in other parts of the country attempted to purchase Jed but for various personal reasons had to back out. Donna Gonzalez, Jed’s co-breeder, then approached me and I remember her saying “you and this dog are meant to be together.” She was right. I drove to Helen Word’s home in Olympia where Jed lived (Helen was Jed’s other co-breeder) and purchased Fircrest Black Gold v Sunrise. The rest is history.

Jed introduced me into the world of conformation showing, which I had always had an interest in. Thanks in great part to Donna Gonzalez, Lorry Bellah and Julie Hamasaki, Jed was trained for showing and went on to achieve his AKC Championship at age 2.

Donna, Lorry and I traveled all over Washington, Oregon and California showing Jed. He loved it and his fan base loved him.

There were moments in this journey that I have always pondered and proudly held on to: When Bill Basu, a professional handler from California, dropped his 6-9 puppy class winner to take Jed back in for Winners, Jed having won the 12-18 class, at his first specialty show in 2006. Bill was willing to handle him saying “I think this dog could actually win this so I’ll take him in for you.” Donna and I looked at each other in sheer amazement! He didn’t win and when Bill brought him back to me his comment was “this dog needs discipline.” When Jerry Guzman, a professional handler, and Karen Taylor, a professional trainer, from California told me “you have a good one,” my chest probably puffed up more

than it should have. When Kent Boyles, a professional handler and trainer from the mid-West, complimented Jed, I was over the moon with pride!

Jed won his first two points at the Enumclaw shows under Judge Kay Raemensnyder in August 2006. He won a 4-point major under Judge Gloria Birch at the German Shepherd Dog Club of Washington State specialty in May 2007, a show many told me not to enter because Ms. Birch would not look at a black dog. I entered anyway and, I believe, he was the first black German Shepherd Dog she had ever awarded Winners Dog. His second major win was a 3-point show under Judge Kathy Casteel back at the Enumclaw shows in August 2007. It was this win that gave Jed his Championship. The next day, his first day out as a Champion, Jed was awarded Best Opposite Sex to the Best of Breed winner.

Because of his winning personality and stable temperament, Jed was invited by Kay Raemensnyder to be the German Shepherd Dog representative at the Judges Education Association of Washington, an educational conference for all-breed judges. Kay and Jed knew each other from Jed’s days of training with Julie Hamasaki. Kay wanted the judges to see a black German Shepherd Dog and knew that Jed would be able to handle standing for the participating judges to perform their examinations as

they would have to do in a show environment. Then we all went outside so Jed could perform a gaiting demonstration. Of course he won their hearts.

These are just a few of the many compliments and moments in history that Jed allowed me to experience.

Due to Jed’s subsequent health problems we joined several German Shepherd internet health chat groups, nationally and internationally. Jed and I bonded with people and their dogs easily and we had, and continue to have, friends all over the country who are, likewise, mourning the lose of this special dog. I was recently contacted by the creator and owner of the epi4dogs website, Olesia Kennedy, who is a pioneer in the world of EPI research and education. She has asked to honor Jed with a memorial page on that website. He would be so pleased.

Jed awoke in me a creativity for writing that I did not know existed. As a result the monthly article “Jedisms” was created for the Northwest Shepherd News. Jed never ceased providing me, his ghost writer, with stories to share with the world about his life, and at times, our lives.

Thank you, Jed, for the journey! What a journey it was. I enjoyed every minute of it.

So, as Jed was often fond of doing, I will use this, our last movie quote, and say to all of you “we have enjoyed being a part of your lives.”

Leslee and Jed in spirit

I would like to say thank-you to Jed’s friend and veterinarian, Joseph Richter, DVM. Dr. Richter became aware of Jed through the German

Shepherd Dog Club of Washington State and our Jedism articles. Before Jed became Dr. Richter’s patient, he had been studying and researching Jed’s EPI and Perianal Fistula conditions, simply because he found Jed fascinating and the research interesting. He would send me information on current studies and treatment ideas for me to suggest and pass on to my then veterinarian, never once attempting to solicit our business. That spoke volumes to me. When I finally grew frustrated with Jed’s treatment we made an appointment with Dr. Richter. Joe calmly and professionally helped Jed and me through many obstacles. He described Jed as a “gentle soul” and told me that Jed was making him a better vet. Jed would reward him with a kiss and a smile.

The staff at VCA Pacific Avenue Animal Hospital are also deserving of a word of praise. They were always kind, helpful and, in particular, made our last appointment a calm and peaceful one. Thank you!