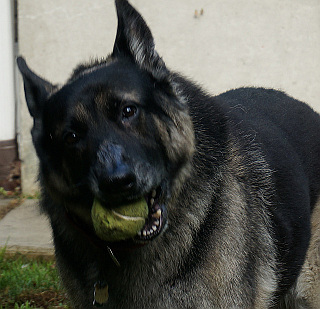 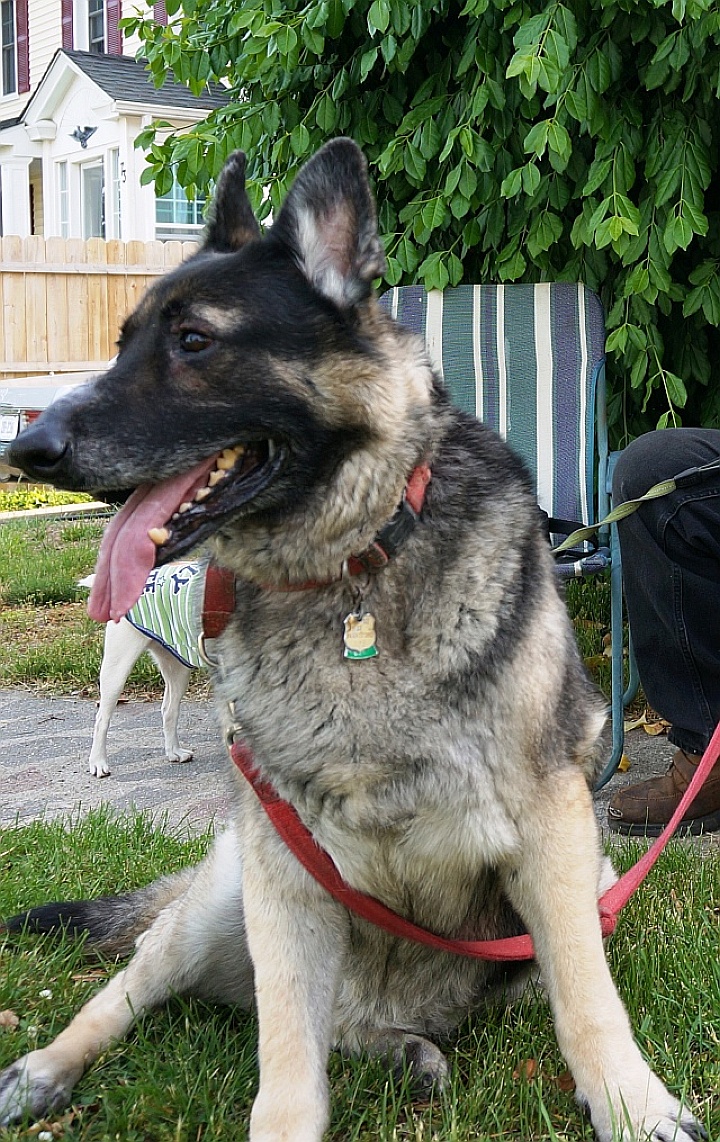 I lost Dancer yesterday.  I am less important in the world.  I’ve had a lot of dogs I loved with all my heart but there’s something about this German shepherd.  I was important to him; to Dancer.  He loved me with all he had.  He was my protector; no “home invasions’” here.  I belonged to him.  He would try to read my mind and I think I could read his.  He was very intelligent, always did as he was asked, always a gentleman with me, always looking to defend me.  Unfortunately his protecting cost me a lot of money. (Please see the humor in this.)  Ah, let me explain: 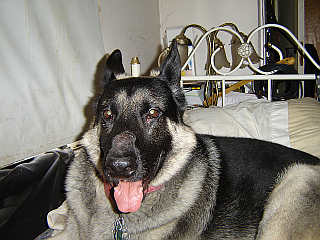 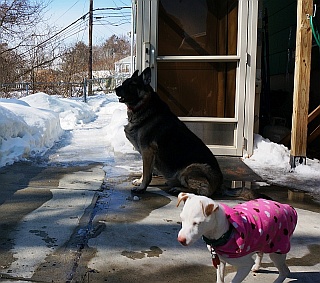 Dancer was named for how he danced when got his dinner and Santa’s Reindeer.  He came from a broken home.  August 22, 2007 at 8 months I was his third family.   I had prayed to have a German Shepherd again.  A friend said, “My daughter is on her way, taking her dog to the pound because he knocked over the baby with his tail.” (He was full blown EPI Yellow Diarrhea cow patties then.) My friend told me his daughter’s marriage was in turmoil and addiction. “They did “crack” around the dog.”  When I met Dancer he came with me right away.  They were surprised.  Dancer mourned them for months. Always taking a double look when a baby stroller rolled by.

They neglected to tell me the guy was a “Biter”, a nipper really.   He bit everybody:  Friends, relatives, strangers. One man who came in the yard even though he was tied up.  Once he had to go to dog jail for two weeks “quarantine”; A neighbor said he was innocent that time.   When I walked him I attached his leash to a weight lifting belt around my waist and everything was double secured, two leashes, two collars, two locks, two gates.  He still landed one on a wonderful lady, made a little tear in her jacket; I begged to pay for her clothes but she would not take any money.  She said “I understand I have had dogs like this.” She disappeared when I glanced away.  I looked for her.  I wanted to make it right. I look for her still, 7 years later.  Maybe she was an angel.

I did everything I could. I begged those nipped,”Please don’t call the dog warden, they will put him to sleep.”  I passed out hundred dollar bills to the “nippies” and tried to train him with the “Illusion” collar.  At a seminar for GSD show dogs the trainer used me as an example to teach him to heal.  Afterward she said,” He is stressed from being sick.  Look at him and smile every time he looks at you.”  I did.  He was in love with me.  I wished he had the personality of a therapy dog.  I had to remind myself he didn’t.  He’s is just not that kind of dog, except with me and his dad.

In 2010 my Great Aunt Helen, at 100 years old, asked me to help her.  She took care of her daughter who had a stroke in 1991 who has dementia, is incontinent and non-verbal and she took care of her grandson who is mentally handicapped. I had been helping her with groceries, doctors’ appointments, repairing her house and errands for 10 years. She made it clear she wanted me to take over their care after her eyes closed.  So I left my house and moved in to care for them.  I got chain link fence and fenced in the back yard for Dancer.  We loved it.  The last few years he did not want to walk much because of fear of fireworks and I feared kids would want to pet him.  So we played in the back yard.  Surprisingly, Dancer had many friends.  “Your friend has come to see you!,” I would say to him.  He would be so happy with those he knew.  He has been happy and comfortable the last five years. My Aunt Helen died at 104 years Dec 3, 2013.  I have been basically running a nursing home since she broke her hip in the summer of 2011.  I was here for Dancer, never too far away.

Oh, the EPI journey; He was diagnosed at 10 months.  He was down to 56 lbs. and looked like he had been in Dachau.  But, once on the enzymes, the guy thrived.   He got up to 124 lbs. and I had to start mixing string beans in his food to fill him up and get him to lose a little weight.  He guarded the house.  He looked after his mother. He was a champ at ball playing. He (yes, the dog) adopted a  4 week old Jack Russel Terrier who had been traveling around the frozen tundra in an old pickup truck, tucked in the jacket of a 19 year old friend of my grandson, who I let stay at my house. (Special Ed kids.)  Dancer was so gentle carrying him around by his fleece coat.  That would be my other dog “Dasher” 3 ½ years old.  They had such a great time playing together and playing ball with me.

Around the time I moved into Helen’s, Dancer was diagnosed with Lupus and had bumps on his nose. (You can see it in his picture).  In February, 2014 the vets thought he had cancer, Cutaneous or Reactive Histiocytosis. The biopsy and DNA test on Dancer was inconclusive.  However, the bumps near his eye and in his ear and on his legs responded to Doxycycline and Niacinamide vitamin which I used for the lupus.  He died of inhalation pneumonia, a megaesophagus and possibly had Myasthenia Gravis.  He had been feeling so much better with his B-12 shots and my efforts to treat him for SID/SIBO suggested by my new friends on Epi4 Dogs. I fed him 2% – 3% of his weight in meats as I tried to treat his symptoms of growling stomach and regurgitation.  In the end Dancer’s sickness happened so quickly.  Just when my attention was on his cat brother with a lens luxation/eye removal surgery on the second day Dancer was sick.  He was gone in three days.

I am so very glad to have been honored to be Dancer’s Mother.  He was worth every bit of worry and pain, even that pain which I have now, in losing him.  I have a hole in my heart. I loved him dearly.  He was so good to me.  Dancer, Thank You for being my dog.  Lord, Thank you for giving him to me.

Thank you, all of you, who helped me with this end of journey.  Who helped make his last four weeks great.

So the take away is that the symptoms of SID/SIBO can also be for Megaesophgus, he never did have the stool problems associated with SID.  I did ask his vet about the symptoms but somehow he didn’t see what I saw.

God Bless Dancer and all the other sick dogs.  And God Bless all the wonderful people who love and care for them. ~Jeanie