Home » Before & After » Duncan 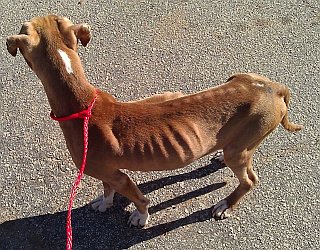 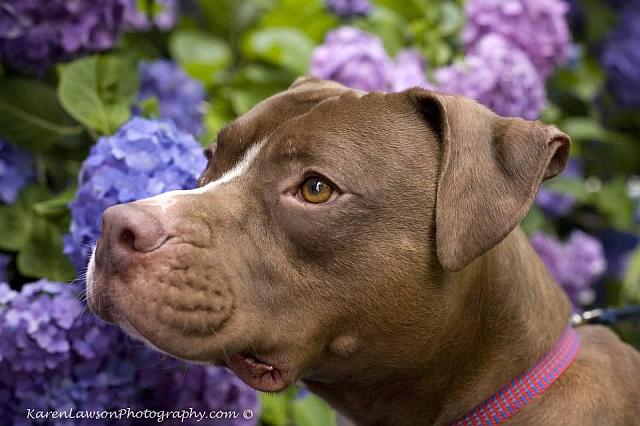 My journey with Duncan started with a phone call from a friend and fellow advocate of the homeless animals in our local kill shelter.  Her exact opening statement to me, “Lisa, you have got to see the dog that came in!”  She noted that a mutual friend was the one that gave him his name, Duncan, when he arrived at the shelter.  While it may have been of no consequence, I was curious to see what this name meant, so I Googled.  I learned it means brown warrior or fighter.  I was to visit the shelter that weekend, and I was certainly going to make it a point to meet Duncan.

Sunday came and I made my way out to the shelter.  Upon seeing Duncan, I sensed something special about him. 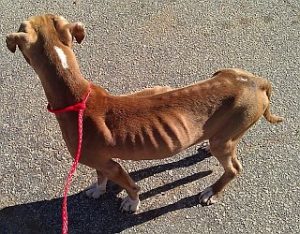 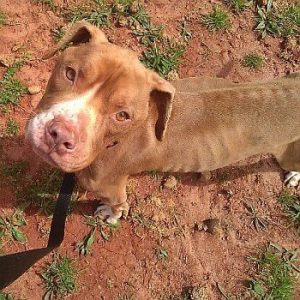 He was skin & bones, his fur a disaster, and his ears with tissue seemingly dying along the outer edges, but something else was there.  A gentleness, a will to live, and love that truly called to me. I led him on leash outside to the sunshine.  It was a chilly day and rather windy, but I felt the sunshine would please him. 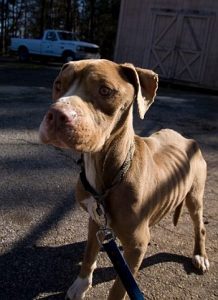 As I stood in the grassy area with him, he gently placed his front paws to my tummy.  In that moment and before I could reach down to protect him, a gust of wind caught him and slammed his frail emaciated body hard to the ground.  For a moment, I stood in frozen horror at what had just happened to him.  Then, I helped him up, hugged him close, and made two promises to him: you will not die here, and I will never give up on you.

Truly, my thoughts were to get a rescue involved, but no one wanted an emaciated Pittie, who by the way, tested positive for heartworm.  So, my desperate attempts all met dead ends with each rescue contacted. My Mom always says things happen for a reason, and she maintains those things happened because Duncan was always meant to be with me.  Indeed, I adopted this frail sick boy.

I knew he needed to put weight on to go through his heartworm treatment, so that became my focus.  Our goal was to get from the 28 pounds that he was when I adopted him to 56 pounds, which was considered to be his ideal weight.  We got to 53, and the vet decided to move forward with heartworm treatment.  He was also neutered when the vet felt it was safe to do so.  Everything seemed to be moving in the right direction, but then Duncan went through a dramatic and sudden loss in weight.

While his stools never looked like my other dogs’ stools, I came to think it was his normal.  I am dog savvy, but I had never had a Pittie.  Someone who did told me that they tend to have tender tummies, so I believed this was what I was seeing in my boy.  Nonetheless, his condition continued to take a turn for the worst and visits to the vet resolved nothing.  I also noticed his temperament was changing, as he became more and more anxious.  Physically and mentally he was deteriorating before my eyes, and I became more alarmed with each passing day.  Then, I learned about EPI.  I read about it and everything fit, so I discussed with Duncan’s vet.

He agreed that Duncan should try enzymes to see if they benefited him, and they did! 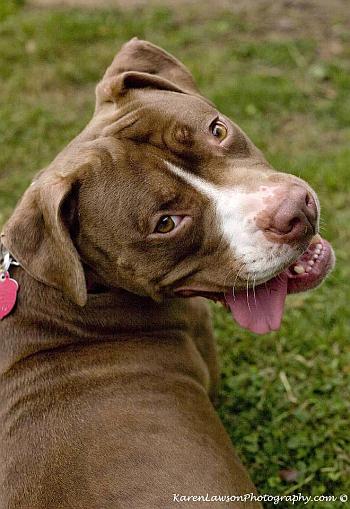 He had his first healthy looking stool at about day 3, and they continued to look better with each passing day.  I introduced Tylan into his regimen, and that helped with SIBO/SID he experienced.  I also make sure he gets his B-12 with intrinsic factor.
As you can see from the before/after pictures, Duncan is now doing amazingly well! 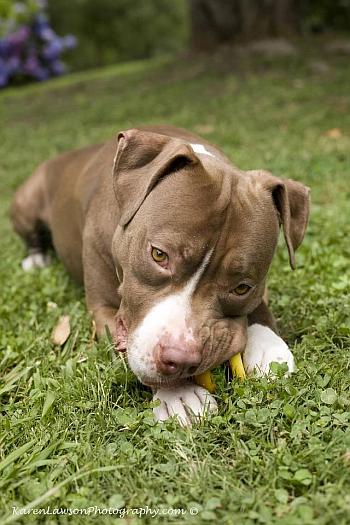 I am very thankful to this website and to all that helped me to find the cause for my boy’s suffering, so that he could truly have the life he deserves.  I love him very much, and he is truly the poster boy for how very much a special needs rescue dog can enrich one’s life.  I cannot imagine life without Duncan, as he is such a blessing.  He truly is deserving of the name, Duncan.  My brown fighter (for his life). 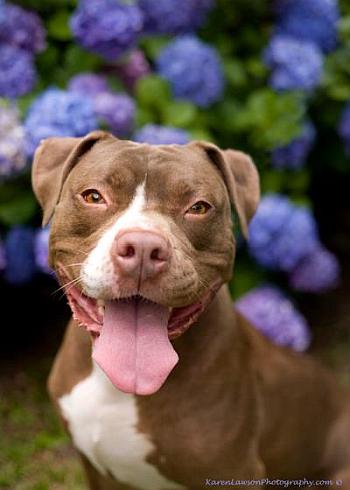